Reading my sister Caroline Levine’s extraordinary new book Forms: Whole, Rhythm, Hierarchy, Network, I’ve been reflecting on similar ideas that I have come to quite independently.

In college, I was deeply struck by the argument that human beings (whatever we all share as members of the same evolved species) are also divided into large clusters whose members think alike in important respects but differ with outsiders. Those clusters can be called cultures, worldviews, Weltanschauungen, etc. That these groupings are internally consistent but different from one another is an essential premise of philosophers like Hegel and Herder, of founding anthropologists like Boas and Malinowski, of New Historicist critics like Catharine Gallagher and Stephen Greenblatt, and even of deconstructionists who seek to rupture such “bounded wholes” (see Caroline Levine, pp. 26, 115-16). I’ve found the same assumptions elsewhere, too. The influential psychologist Jonathan Haidt assumes that each person subscribes to a “moral matrix” that “provides a complete, unified, and emotionally compelling worldview, easily justified by observable evidence and nearly impregnable to arguments from outsiders.” And (although different from Haidt in most other respects) John Rawls called a “plurality of reasonable but incompatible comprehensive doctrines” a “fact” about the world.

At one moment during the summer of 1989 (crossing the street in Rosslyn, VA), I thought: But each of us belongs to many of these clusters at once. The clusters overlap; their borders cross. In fact, even twin siblings would have somewhat different influences and assumptions. I drew this pair of diagrams, which appear in my Nietzsche and the Modern Crisis of the Humanities (1995, p. 188-9). 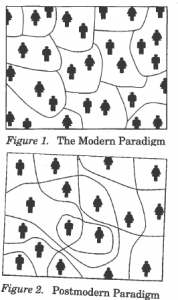 I favored what I pretentiously called the “postmodern paradigm” of fig. 2 and claimed that it dispelled some of the dilemmas of value-relativism and skepticism that bedeviled modernity. This was before the large literature on “intersectionality” really got going. I agree with the argument that (for example) race, gender, and class can “intersect,” but I would push that to its limit. Our backgrounds intersect in so many ways that everyone stands at a unique intersection.

Now I am more likely to draw a different kind of map, one that treats each person’s mentality as a network of ideas, such that the nodes are typically shared by people who interact, but each person’s overall network is unique. (This is the map of the ideas identified by my students in a recent class. Each student is displayed in a different color, and their networks touch where they disclosed the same idea.) 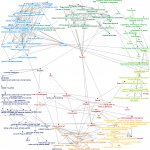 Caroline would describe figs. 1-2 as sets of bounded wholes, and the third diagram as a network map. Wholes and networks are two fundamental forms in her account–she also investigates rhythms and hierarchies. Indeed, the two forms I display above are limited in two respects. They are time-slices that fail to capture change. (Rhythm is missing.) And they are all about ideas and values, not about institutionalized forms, such as hierarchies. I think she is correct that all four types of form–and no doubt more as well–overlap and contend, creating the structures in which we live but also offering opportunities for emancipation if we figure out how to put them together in new ways.