A group has been discussing how to improve upward economic mobility in the Boston metro area, which is booming but leaving a lot of people behind. I do not know much about economic mobility, nor do I lead an antipoverty organization, so I have found it a privilege to be in the room with people who have real knowledge and clout.

In the discussions so far, I detect three theses. When I mentioned this list, some people felt that they are all true. Indeed, the ideas may fit together in various combinations, but I see tensions among them.

1. We know how to improve the prospects of low-income people; we just don’t have the will to do it. Innovation should be at the political level, changing the balance of power or the messages that resonate.

Probably the strongest evidence for that thesis is international. This OECD publication is one of many that shows poor intergenerational mobility in the US compared to countries like Denmark, Australia, and Norway. The same study finds that public investment in early childhood correlates with better mobility. We don’t invest much in preschool in the US. The reason is arguably that affluent suburbanites don’t vote for it because they don’t need it, while poor people don’t vote for it because they are generally disenfranchised and dispirited. So we need political strategies to change voters’ preferences to shift government. 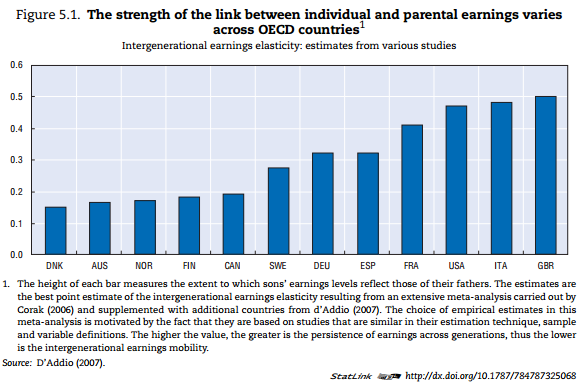 2. We don’t know how to help people move up the mobility ladder in a post-industrial, knowledge-based, global economy. We need innovative programs and R&D.

Ron Haskins recently wrote, “Despite decades of efforts and trillions of dollars in spending, rigorous evaluations typically find that around 75 percent of programs or practices that are intended to help people do better at school or at work have little or no effect.” That’s a controversial claim; I have previously addressed the complex question of whether to rely on randomized studies. But it is a plausible claim, especially if we restrict it to hands-on service programs (in contrast to entitlement transfers). To be sure, we see more intergenerational mobility in Denmark than in the US, and Denmark has large-scale policies that probably work–but I’ll bet they work less well than they used to, and they may not apply in situations like our massively deindustrialized cities. So there is a case for finding new strategies that really work instead of spending tons of money on things that don’t.

3. People in poor communities should determine their own futures.

Again, I think these theses can fit together in various ways; many individuals see merit in two or even three of them. But they do pull you in different directions.