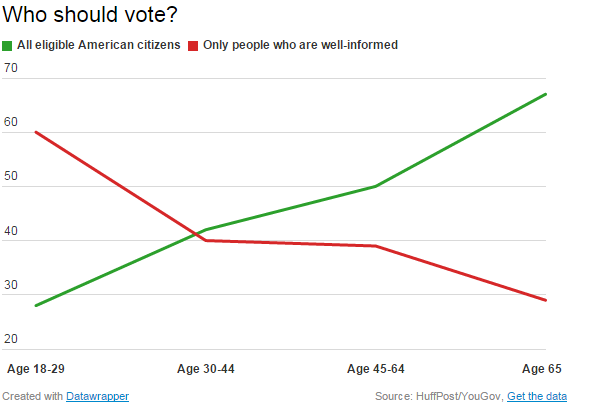 According to a HuffPost/YouGov survey reported by Ariel Edwards-Levy, younger Americans are the most likely to believe that you should only vote if you are well-informed. According to the same poll, younger Americans guess that a majority of their fellow citizens vote in midterm years. They overestimate national turnout far more than older people do. Yet many of these younger respondents do not vote themselves. (We know that actual youth turnout is only about 20-25% in midterm elections). They must see themselves as outliers–in a bad way. They are critical of their own political knowledge and believe that other people know more than they do.

The ones who do vote are quite well informed. According to the exit polls, 77% of 18-29s who voted this November claimed to have followed the midterm election at least “somewhat closely.” But many others may have told themselves that they don’t know enough to vote. As I said to Edwards-Levy, “If anything, they might be putting themselves through too stringent a test.”

Of course, you should inform yourself before you vote. But I don’t think our main problem is uninformed people casting ballots; it’s people staying home because they are actually uninformed or think they are. It is hard to collect political information all on your own just so that you can vote. The traditional solution is to enroll people in multi-purpose organizations that are also conduits for political information. But those organizations are shrinking. As I said in the article, “Twenty or thirty years ago, there were devices for getting information to working-class young people like labor unions, which they belonged to still, and also churches. … Those things have really weakened, so they’re kind of on their own. If you’re a high school dropout and you’re working at Walmart, there’s no way for you to get information except for you to actively seek it.”