(Syracuse, NY) My father, Joseph M. Levine, collected more than 20,000 books as a working library of a professional historian. Many were published before 1800. I am a sort of trustee for this collection, happily responsible for its long-term future. 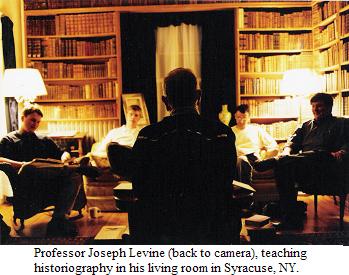 James Madison, the fourth president of the United States, collected a library of books that informed his thoughts about the Constitution. In his case, the next generation meant his ne’er-do-well son-in-law, John Payne Todd, whose gambling debts cost the family all their property, including the books.

Now the Madison home at Montpelier has been restored to look as it did in James Madison’s day. But Montpelier needs appropriate books to display beside the president’s desk. By mutual arrangement, ten feet of my father’s collection are going there on permanent loan. I am in Syracuse to pick out books that might have belonged in Madison’s personal collection ca. 1820.

This, for example, is the same edition of Montaigne on which James Madison took notes when he was a student. Those notes were the very first substantive writings Madison produced in his life. 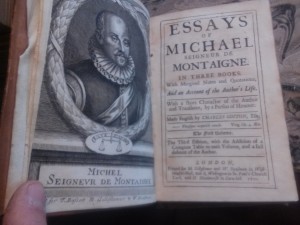 My father was a Jewish boy from Brooklyn, New York; a Dodgers fan; an FDR liberal. James Madison was a slave-holding Tidewater planter. My Dad studied English intellectual history and was something of an Anglophile. James Madison led the US in a war against Great Britain, yet he was very far from an immigrant New Yorker. How do all these pieces fit together?

The answer is a certain version of liberalism. Dad grew up in a liberal family and neighborhood, but an additional formative experience was studying at Cornell during the McCarthy period. Cornell was stocked with great thinkers, including refugees from totalitarianism and veterans of struggles at home. During Dad’s undergraduate years, Vladimir Nabokov, Frances Perkins, Edwin Arthur Burtt, Buckminster Fuller, Clinton Rossiter, and Richard Neustadt all served on the faculty. They pursued rich cultural ideas, developed the inner life, and fought for social reform. Cornell broadened and liberated minds. The Constitution and the fundamental principles of the American Republic stood with the university and against its enemies.

Dad became an historian to join this community of free inquiry, and also to understand the origins of the modern liberal world. He began his graduate studies interested in the founding period of the US Republic, but he soon moved backwards to explore its origins in Tudor and Stuart England. That period became his lifelong interest and caused him to spend many years in England and to ship literally tons of books and other artifacts back from there.

English history is morally complex, as is the legacy of James Madison. England was a monarchy and a colonial power. But England was also the birthplace of individual rights, representative government, and rule-of-law–at least as those institutions have come to the US. It not only gave us our liberal traditions but also our more radical currents. From the Agitators and Levellers of 1647 to the Commonwealthmen and Whigs of 1750 to the Chartists of 1838, English thinkers developed the idea that political liberty and equality should come first, with cultural equality and economic reform to follow. As the MP Thomas Rainsborough argued in the mid-1600s:

For really I think that the poorest hee that is in England hath a life to live, as the greatest hee; and therefore truly, Sr, I think itt clear, that every Man that is to live under a Government ought first by his own Consent to put himself under that Government; and I do think that the poorest man in England is not at all bound in a strict sense to that Government that he hath not had a voice to put Himself under.

Madison would certainly have qualified that populism in many ways. The poorest in Virginia were slaves, and Madison wanted to send them back to Africa rather than admit them as equals to the commonwealth. Federalist 10 presents Madison’s objections to “a pure democracy, by which I mean a society consisting of a small number of citizens, who assemble and administer the government in person.” He feared that “a common passion or interest will, in almost every case, be felt by a majority of the whole ….” But Madison constructed a political order that–when we honor its design–preserves individual liberties, defends minorities, promotes the “mild voice of reason,” and creates an important place for the “republican principle” of political equality.

It seems perfectly fitting that my father’s books should sit by the desk of the man who introduced the Bill of Rights and served as the second Rector of the University of Virginia.

[PS: I shouldn’t have written “desk,” as I believe the books are destined for a small room outside Madison’s study that he used as a library.]