(Salem, MA) I am here for a retreat of the Jonathan M. Tisch College of Citizenship and Public Service, where I work. In the summer of 1987, I came here for a retreat of the Charles M. Kettering Foundation, where I served as an intern between my sophomore and junior years in college. I’ve been back to Salem since then–we don’t live very far away now–but I recollect the first retreat forcefully. Early impressions bite deeply; later experiences just leave surface scratches.

The 1987 retreat was my first business trip: we could charge meals and get reimbursed for them. It was one of my first times sitting around open tables with water pitchers and notepads, talking about what an organization should do. (How many hundreds of such meetings have I attended since?) It was not my first time in an old city, because I had been privileged to spend years of my childhood in Europe, but it was my first time in an old American town. I remember thinking that Salem’s crooked, narrow streets and houses with historic placards were exotic. And it was one of my first discussions about civic engagement: why do Americans not participate as much as we would like in civil society and politics, and what should we do about that?

Now I am grey and “experienced,” a board member of the Kettering Foundation instead of an intern. We’ve seen Prague Spring, Bowling Alone, Points of Light and AmeriCorps, the Tea Party, Occupy. I can’t remember the conversation in 1987 well enough to be sure, but I would bet our analysis is more sophisticated now. People at the 1987 retreat–and many of their colleagues–have done important and valuable things in the past quarter-century. The large-scale trends, however, have mostly been for the worse. 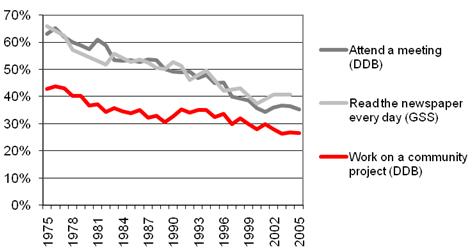 If I’m fortunate still to be having these conversations in 2039, I hope we will be able to point to upward trends, not necessarily in the measures depicted above (for instance, newspapers will probably be defunct), but in their functional equivalents.