I am in Jerusalem. I have traveled to Israel and the Palestinian territories with a group of Americans. We will be meeting with about 20 people here, including Members of the Knesset and a Vice Prime Minister, military and intelligence officers, journalists and academics, diplomats, peace activists and human rights lawyers, both Jews and Arabs. The tour is organized by the Combined Jewish Philanthropies of Boston, but the visiting group is diverse with respect to religion and ethnicity. If one thinks in terms of the Arab/Israeli conflict, this visit is not neutral; it has a Jewish/Israeli perspective. I deliberated for rather a long time before deciding to participate and checked some aspects of the itinerary with Arab friends, who pointed out biases. I ultimately decided that neutrality may be impossible, and in any case, this is my only opportunity to visit the Middle East as the guest of a very well organized and well connected organization. The tour is pluralist and unscripted; we are encouraged to ask critical questions. I am hoping that it will mostly be on the record, and I plan to blog.

(Hyannis, MA) There was some discussion today about whether the value of diversity should have pride of place in academic settings. I have recently suggested that “diversity” is a problematic value if what you really want is equality–but to increase equality is good for some and bad for others. Also, equality is an explicit value commitment. In general, value commitments make people nervous because we are taught to be moral relativists (to believe that values are mere opinions). Diversity seems safer because it is framed as a matter of respecting everyone’s opinions and contributions. I think the underlying motivation for diversity is actually egalitarianism, and it would be better if people could acknowledge and defend that principle. It is not just an opinion but a real good, albeit one that can trade off against liberty, security, efficiency, and other values.

Sometimes the goal of “diversity” initiatives is to make sure that students know they live in a racially, ethnically, and culturally pluralist world marked by frequent oppression. In at least one liberal arts college that I know, everyone is basically required to study the history or culture of a traditionally oppressed group in the United States. I agree that good citizens recognize pluralism and oppression. But we also live in a society whose core principles are idealistic and valid. In other words, the coin has two sides: rights and injustices; excellent institutions and social failures; unity and diversity. I don’t want young Americans to graduate from school or college without understanding oppression. Equally, I don’t want them to graduate without understanding the Bill of Rights, a market economy, and the rule of law. So if one side of the coin is required and emphasized, I’d vote for the other side, too.

This is partly a matter of respect for the truth, because our society actually has two faces. But it’s also the best way to engage diverse students. We are at grave risk of segregating ourselves ideologically to the point where we can’t learn how to live together. If some colleges advertise themselves as places to study diversity, while others teach great books and the Constitution, students will sort themselves into the environments that they find most congenial. Then the courses about oppression will basically just reach liberal students, while only conservative students will read James Madison with appreciation. Both will miss the best opportunities for learning.

(Hyannis, MA for a staff retreat) Here are some bulletins from the National Coalition on Dialogue & Deliberation (NCDD) and the Deliberative Democracy Consortium:

NCDD’s Beginner’s Guide
The NCDD’s Resource Center offers “2,600 resources on dialogue & deliberation.” As they note, that volume can be “a bit overwhelming.” Thus they offer a new Beginner’s Guide.

NCDD’s  “Participatory Practices” compendium
This site is a portal to “descriptions of more than 150 tools and methods used for dialogue and deliberation.”

DDC’s “Planning for Stronger Local Democracy” workshop, July 19
Sign up for this preconference session before the “Frontiers of Democracy” conference, which I’m co-organizing. The presentations, panels, small-group discussion, and a home movie will help participants think through: the strengths and weaknesses of how public participation happens in their community; the key questions they need to ask about the history and patterns of engagement; the building blocks they might consider in their planning for stronger local democracy; and what a number of national associations are doing to inspire, learn about, and support local democracy-strengthening work. Among the people who will be sharing their insights and updates at the workshop will be: Carolyne Abdullah, Everyday Democracy; Kristen Cambell, National Conference on Citizenship; Mike Huggins, National Civic League; Eric Gordon, Engagement Game Lab; Linda Nguyen, Alliance for Children and Families; and Wendy Willis, Policy Consensus Initiative.

John Gaventa, OBE
Our colleague John Gaventa, now at the Coady International Institute in Nova Scotia and a former Tisch Research Prize winner (among has many other awards) has been named by Queen Elizabeth to the Order of the British Empire. By the way, John will be speaking to the “Frontiers” conference by remote video.

The efficiency and power with which we quantify and analyze society has increased astonishingly in less than a lifetime. But our ability to explain, predict, let alone improve society has hardly grown at all.

Around the time when I was born (1967), you collected information about people by talking to them, writing what they said on paper, and then possibly transferring the records to punched cards. You statistically analyzed the data by hand, or, if you were lucky enough to have access to a computer, by running the cards through a program that took many hours just to generate descriptive statistics, such as means. You published results for other people to read, but you could only analyze raw data that you had physical access to. You had to think carefully about every hypothesis and query, because calculation was laborious. Statistical techniques were relatively limited, and more elaborate techniques would have been too hard to execute.

Since then, the following changes have occurred:

And yet … do we understand society much better than we did in 1967? Borrowing from a previous post about the exponential increase in the quantity of information exchanged, I’d suggest that these are the trends: 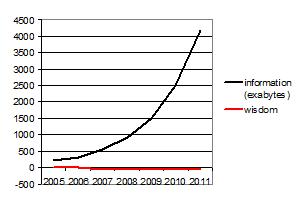 Perhaps we already knew the important truths in 1967: for example, that if you fail to invest in kids, their lives will turn out worse. Perhaps in those days, we understood better how to take political action so that policies would change in the ways that social science recommended. In other words, maybe we can describe society better today but have less influence on it.

Maybe we are lost in trivial or even spurious results. If you test 100 hypotheses, 5% of false ones will look true by sheer chance, so you will generate five falsehoods.

Sometimes I wonder if we have created a Borgesian nightmare, an increasingly detailed map of the world at 1:1 scale, which is not a guide to reality but just a second world to get lost in.

One must have a mind of winter
To regard the frost and the boughs
Of the pine-trees crusted with snow;

(Chicago) Imagine a seashore, where a high, wind-sculpted rock is admired for its beauty. Next to it, a pine tree clings to the same cliff, having grown there to a gnarled and twisted shape because of the salty winds. One day, you visit this familiar shoreline and find one of these objects gone, washed away by a storm. Which one’s loss would you regret more?

Perhaps you should miss the rock more, for it is irreplaceable and beautiful. Pine trees are common; new ones grow. But I would miss the tree more, moved by its struggle to survive.

It is not clear this is reasonable. Perhaps I adopt the following argument, which is an example of the “pathetic fallacy“:

Stevens suggests that it would be a lonely universe if we did not sympathize with nature. But the tree actually feels nothing, and the beauty that we attribute to it because of its struggle is no different (morally) from the beauty we assign to the passive rock.

The tree struggles, and we could call that “will” in the sense of organized striving. But it’s not clear that will without subjective awareness is a matter of concern. An amoeba demonstrates will by engulfing prey, but the amoeba feels nothing more than a drop of water feels as it slides down a window. The amoeba is more complex than the water-drop, but that is not the difference. An elaborate machine is more complex than the amoeba or the tree and yet it makes no claim on us morally.

It’s also not clear that will is a property of organisms alone. I am made up of cells and I belong to several larger entities, such as the Greater Boston area and the United States. My cells seem to want things: consider the blood cells that hunt down and kill bacteria. Greater Boston has operated rather like an organism for three centuries, drawing resources, expanding, absorbing wounds and recovering. I am more complicated than my own leukocytes, but Greater Boston is more complicated than I.