We succeeded in getting some publicity for the survey that we released yesterday: articles in Reuters, Yahoo News, Washingtonpost.com, UPI, and USA Today, and an interview on CBS radio news. I was glad, because we wanted to publicize the survey so that people would be aware of it. Besides, we are held accountable for getting press coverage. That is why we spend significant amounts of money on a professional public relations firm.

I recently posted several critical comments about the pursuit of fame. I am well aware of the irony that days after I wrote those posts, I struggled to craft press releases that would maximize attention.

END_OF_DOCUMENT_TOKEN_TO_BE_REPLACED

civic and political behavior and attitudes, and specifically their reaction to

the ways political campaigns are using the Internet.

Campaigns are effectively using the Internet to reach young people, and will

continue to do so 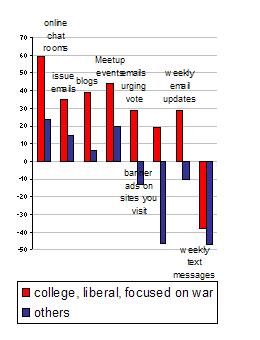 campaigns? Or is it because campaigns see advantages to a cheap medium that

mass mailings)? Overall, our data show that young people are not particularly

favorable toward new, online campaigns techniques. They favor some approaches

Despite a general lack of enthusiasm for many online campaign techniques,

however, there are some pools of young voters who do like the new technologies.

For example, those college students and college graduates who are liberal

favor their use in campaigns by 68%-32%. This group also likes “banner ads”and

weekly email updates, which are unpopular among youth in general.

The graph shows the percentage who like each campaign technique, minus those who don’t like it or call it a “turn-off.” We distinguish liberal college students who are concerned about the war (red bars) from other youth (blue).

These findings put the Dean phenomenon in context. The demographic group

that most likes his campaign themes is also most favorable toward electronic campaigning.

for other candidates. Given that strong partisans and well-educated youth are most enthusiastic about the new technologies in politics, the Internet looks like a means to organize core voters, not a way to expand the franchise

I often ask myself this question as I arrive at work, since my office is in a building dominated by a business school. I’m all for programs that train effective business executives. But should these programs be subsidized by state universities and nonprofit institutions? Should they use academic norms such as tenure and peer-review? Why not just have for-profit training academies? There may be a great case for academic business schools, but I’m not sure.

END_OF_DOCUMENT_TOKEN_TO_BE_REPLACED

Along with the Council for Excellence in Government, my organization, CIRCLE, will release a new poll of young Americans on Thursday. So I’ve spent a lot of my time helping to analyze the poll results and figure out a strategy for persuading the press to pay attention (even during the run-up to the Iowa Caucuses).

END_OF_DOCUMENT_TOKEN_TO_BE_REPLACED

This blog celebrated its first anniversary on Jan. 8, although I forgot to mark the day with an entry. (You can click here for the very first post.) Just a few days before I began to blog, I had moderated a conference panel on “communitarian approaches to cyberspace.” Amitai Etzioni had selected the speakers, who included two of the most prominent–and best–bloggers in America: Eugene Volokh and Glenn Reynolds. I knew about blogs, but I didn’t recognize these people. Before the panel, I had quickly looked them up on their respective universities’ websites, saw nothing about their blogs, and therefore failed to mention what makes them both most famous. The panel discussion naturally focused on blogs and strengthened my feeling that I’d like to get into the game myself. Apparently, I wasn’t the only one who reacted that way. The two other invited speakers were Jack Balkin and Amitai himself. Balkin started his fine blog on Jan. 10, 2003; Etizioni’s equally good one was launched a few months later in ’03.

(Incidentally, I don’t see blogs as having very much to do with community in cyberspace. I deeply appreciate the frequent visitors to this site who leave posts or send me email, and I look frequently to see what they’re up to online. In a couple of cases, they have volunteered invaluable assistance or advice. Nevertheless, I doubt that any of us would describe those occasional exchanges as a “community.”)