I was wondering whether the states that tax their residents

at high rates tend to have higher or lower income levels. I

with lower taxes would tend to generate more personal income. This is

not the case. Although the relationship between tax rates and per capita

income is not significant, generally the states that take the biggest

capita wealth. States like Alabama have been low-tax zones for at least

a hundred years, yet they remain among the poorest of all states. 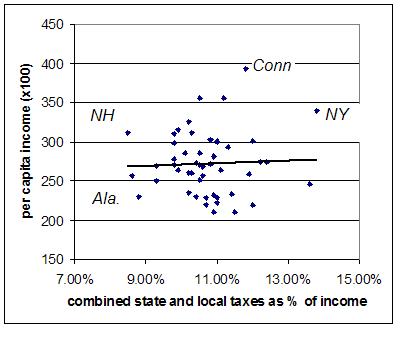 This isn’t "social science." It’s just playing with a computer

to get a quick answer to a simplistic question. Still, the graph poses

a real question for supporters of laissez-faire economics: if low taxes

create wealth, what explains Alabama? (Sources for the tax

rates and the per

If you’re interested in how GIS (computer mapping) technology

can help us understand human beings’ use of their physical environment,

check out the 3-D

These are beautiful images, and potentially useful too.

On the day after the UN building in Baghdad was blown up, the US press is rushing to say that the occupation of Iraq is perilously close to failure. I am a card-carrying dove who opposed the war, as this collection of blog entries shows. However, I was wrong about the aftermath, which I thought would be considerably worse than it has turned out to be. The current situation may actually be closer to what the Bush Administration predicted than to what I expected. I thought that there would be massive communual violence, pitting Shiites against Sunnis and Arabs against Kurds. I thought there would be a civil war over important assets like the oil-rich city of Kirkuk, which is disputed between Kurds and Arabs. I thought that neighboring countries would be dragged into the war before Saddam was deposed–including Israel, which I thought Saddam would attack. I thought that the (putative?) illegality of the operation would cause us more trouble with Europe than it has. And I thought that large segments of the Iraqi public might well oppose our invasion violently, mainly because they would hold us responsible for the sanctions regime. None of these awful scenarios has come to pass. That doesn’t mean that the Iraqi occupation/liberation is going especially well, but hope certainly remains that it will turn out to be a blessing rather than a curse for both us and the Iraqi people.

I came across a quote today by Myles

Horton, the great founder of the Highlander Folk School in Tennessee,

rights movements. Horton said that he had learned from decades of nonviolent

struggle against injustice that "the way to do something

was to start doing it and learn from it."

I recognize the limitations to this approach. It’s good to have a "strategic

plan" with goals and methods all arranged in proper order. Yet

often in civic work, improvisation is both a necessity and an inspiration.

As long as you keep your mind open, listen to others, and try to learn

from everything you do, it’s sometimes wise to start working even before

you know exactly what you are doing.

that can support our local work with kids.

I don’t know where that work will take us, but it seems important to

sustain a nascent institution by grasping the opportunities that come

along. (I don’t mean to compare myself and my colleagues to Miles Horton,

because we’re not struggling against injustice as he did. But we do

have a similarly cavalier attitude toward planning.)

different styles of the Gephardt, Edwards, and Dean presidential

and incomplete text transcript or listen to the audio here.) Actually,

what conception of the role of citizens is implicit in each campaign.

My quotes suggest that I’m biased in favor of Rep. Gephardt, which

is not really true. I do believe that if he fails, it will be symptomatic

of the collapse of mass mobilizing institutions, such as unions and

political parties, that used to multiply the power of ordinary people

and connect them to Washington. I do not believe that the Gov. Dean

style of campaigning, which is very “21st century,” offers

an entree to people near the bottom of the socio-economic heap. They

won’t be mobilized by listservs, blogs, and Meetup.com. This is

not only because they lack Internet access and interest in politics.

It’s also because of the basic logic of collective action, which tell

they are assured that others will also contribute. Voting is always

partly an altruistic act, because even if one votes in one’s own self-interest,

to expend the energy. Disciplined organizations such as unions overcome

this problem by guaranteeing that not only you will vote; so will many

like-minded people. Meanwhile, they lower the “cost” of voting

that the cost of voting is relatively low, because they already have

much of the necessary information. Thus they don’t need unions and parties;

blogs. Poor and poorly education people are at a disadvantage in this

environment, and their disadvantage is worse than it was fifty years