My organization, CIRCLE, has made grants to teams of young people who design and conduct community research projects. We are able to make these grants thanks to funding from the Cricket Island Foundation. We also provide the youth teams with some guidance.

Some of our current grantees are a group of homeless youth from New Orleans, who were planning to study the police treatment of their peers (i.e., other homeless young people). Katrina made that research impossible by scattering them across the country. However, they have changed their project to investigate the Katrina experience and its aftermath.

Last week, the Chicago Tribune ran a helpful story on these young people’s work. The reporter, Dave Wishnowsky, kindly included some contact information for dispersed New Orleans youth to use if they wanted to be included in the research. The story is entitled “Collecting Katrina memories: Young evacuees plan to write book.” You have to register with the Tribune to read the whole story here; but I quote some portions below:

END_OF_DOCUMENT_TOKEN_TO_BE_REPLACED

At CIRCLE, we plan to fund some young New Orleanians who were displaced by Katrina to conduct research on the experience of the disaster. The youth we’re working with happen to have been homeless before the storm, so their perspective will be interesting. Meanwhile, I have received the following appeal by email. Knowing some of the people involved, I believe I can disseminate it in confidence:

Amid all the confusion in New Orleans, inspiring grassroots projects are taking shape. One inspiring example is the work of students at Frederick Douglass High School who are rebuilding the social fabric of their community in the low-income 9th Ward. A group called Students at the Center, originally a creative writing program based at Frederick Douglass High, a predominately African American school, has dedicated itself to rebuilding their inner-city school and neighborhood.

A core group of these Frederick Douglass students, teachers, artists, and parents currently displaced across the country has stayed in communication, and wants to meet face to face in New Orleans so they can assess the damage and plan their next steps to save their community. It is our goal to raise $10,000 to enable 15 to 20 of them to reconnect November 11-13.

“The people of New Orleans will make the decision” of which schools to rebuild or abandon, according to Education Superintendent Cecil Picard (“New Orleans Public School Enrollment May Be Halved,” Times-Picayune, 10/13/05). If the families at Douglass High are to have a voice in these decisions, they need your support now. This is a poor neighborhoods without political clout or the resources to travel.

Please contribute $25, $50, $1,000, whatever you can, either by check (see below) or by PayPal on the New Village Press website One hundred percent of your donation (we will pay for PayPal processing) will go directly to airfare, ground transportation, food and lodging for the 3-day gathering. Make checks payable to New Village and designate it for Rebuilding New Orleans Community. We’ll keep donors informed about the progress of this project.

The reconstruction of New Orleans represents an opportunity to employ techniques for civic participation that have been developed and tested over the last 30 years. For example:

I do not mean to suggest that the destruction of New Orleans is in any way a good thing, but we should try to rebuild as well as possible. I’m taking a cue here from E.J. Dionne’s interview of Rep. Earl Blumenauer (D-OR). Blumenauer sounds like my kind of person: an enthusiast for public participation, an environmentalist who’s optimistic that we can make the lived environment better than it was before, a hawk about federal deficits, and a guy who’s “always seeking to put together left-right coalitions on behalf of his eclectic mix of ideas.” He told Dionne:

I’ve been in Congress for nearly 10 years and I’ve never been so optimistic that we have a chance not just to engage in the gargantuan task of helping people in the Gulf, but also of healing the body politic. … You’ve got to build a citizen infrastructure along with all the roads and bridges. … [P]eople should have a role in what it should be like, rather than have it done to them

I don’t know if his optimism is justified, but we certainly need ideas, energy, and innovation.

In the aftermath of Katrina, an emerging line of argument goes like this: Bush is an anti-government conservative. Anti-government conservatives cut spending. Therefore, Bush cut spending. And the flooding has revealed the vulnerability of poor people when government spending is inadequate. I suspect that the real story is somewhat different. Bush is a profligate spender who borrows to finance rising expenditures. Cuts are coming, forced by the debt, but they have not happened yet. Therefore, it is generally inaccurate to attribute current social problems to Bush’s spending cuts. The real culprits are decades, even centuries, of under-investment, plus very poorly managed government–both in big cities and, since 2000, at the federal level.

The full story is probably somewhat more complicated, since there have been federal cuts in some programs. I wish that financial data were more widely cited in the debate about what Katrina “means.” In my limited discretionary time, I have created two graphs, both of which end in 2002. (More recent data are not easily found.)

The first shows that total federal spending per capita increased in Louisiana through 2002, although these numbers are not adjusted for inflation. Consistently, about 10% of the annual spending is for defense. 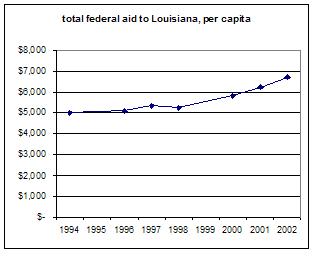 The second graph shows that spending per student in the Orleans Parish public schools rose, but then fell in the 2002-3 school year, mainly because of a drop in state support. Again, these figures are not adjusted for inflation. 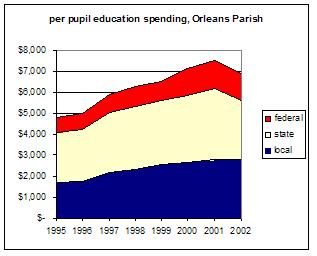 I acknowledge that these are just snippets of information, and I’d welcome more detail about any actual Bush spending cuts that might have affected citizens of New Orleans.

According to the New York Times, in areas of New Orleans where there was significant flooding, the poverty rate was 29%, four out of five residents were people of color, and the ratio of adults to minors was (as I calculate it) 2.58-to-one. That is a similar ratio to what we see in Detroit and Camden, NJ. It is not too far below the national average of 2.5-to-one. But it is quite different from the pattern in wealthier neighborhoods. In contrast to the inner city, some of Detroit’s suburbs have four adults per minor. Even the non-flooded parts of New Orleans (where the median income is much higher and about half of the residents are White) have an adult-to-minor ratio of 3.5-to-one.

Why does this matter? Dan Hart and colleagues argue that “child-saturated” communities–those with fewer than three adults per minor–do not provide many adult role models, much adult supervision, or many opportunities for participation in adult-led groups. On the bright side, when there are many youth, they can participate in volunteer activities together and benefit from positive peer role models. Youth are more likely to volunteer than adults; therefore, volunteering is particularly common in youth-heavy communities. But there is an important exception: youth-saturated neighborhoods that are also poor tend to have low levels of civic participation as well as high rates of delinquency. This is probably because young people suffer from the shortage of adult leaders, and there are too few youth organizations with adequate and legitimate funding to absorb most kids. The “autonomous youth culture” is subject to heavy influence by one group of local people who happen to have money and power: criminals.

Thus cities like Detroit and Camden face a shortage of adults along with their other problems. And I suspect that the low adult/youth ratio in New Orleans–which may have dropped further after the evacuation–is an important reason why order broke down there.