Here are some graphs that show Americans’ changing views of equality. You can click them to expand them. In each case, I’ve graphed the opinion of the whole population, of people who identify as working class (a measure more of self-image than objective resources), of younger people, and of one pivotal generation, the Boomers, as they’ve moved through time. Each point represents at least 100 respondents, usually many more. 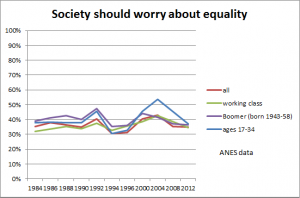 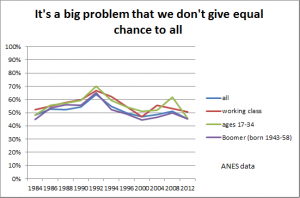 outcomes, and many perceive that opportunities are pretty equal. 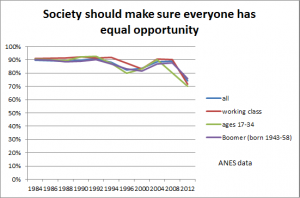 Differences by class, age, and generation are not striking. Younger people have been somewhat more likely to think that we should worry about equality, but they’ve actually been a bit less likely to see unequal life chances as a big problem. Boomers have tracked the national mean during this period, as have working-class people.

The other equality measures rose during the Reagan and Bush I administrations, fell under Clinton, rose during Bush II, and fell under Obama. Any of these explanations might hold: people react negatively to the perceived priorities of incumbent politicians; or Americans view equality as taken care of under Democrats and unaddressed under Republicans; or Democrats win elections when the economy is bad, and that’s when Americans grow concerned about equality.

Finally, I really don’t see a secular trend here–i.e., a trend that would reflect long-term changes in the economy or the demographics of the country.  Two of the measures stand roughly where they did in 1984, and the shifts appear to be short-term reactions to presidential administrations or the business cycle. There’s possibly a long-term trend in the general belief that “society” should ensure everyone equal opportunity. One could perceive a decline in that measure since 1992, although if 2016 or 2018 registers a rise, that decline will look illusory.