In the year 1596, Anna is about to be burned at the stake. As the constable prepares to light the fire below her, she can do nothing but seek a solution in her own memory and imagination. 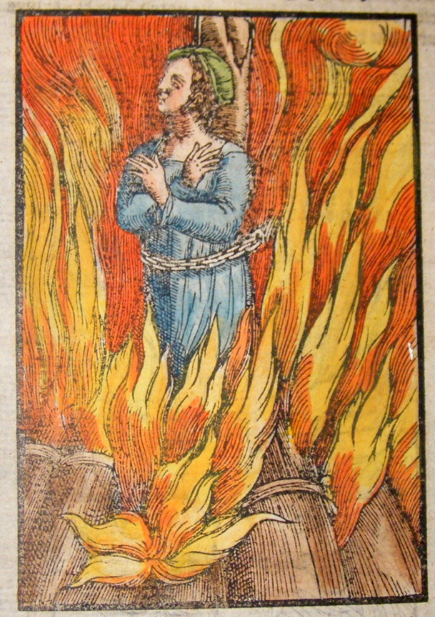 The Anachronist is a game in which you make choices that determine the outcome. By increasing Anna’s knowledge, you can create opportunities for her to act. By decreasing the entropy or disorder of the whole situation, you can raise the odds that the ending will be a happy one for all of the characters. If you try to conclude the story while knowledge is too low or entropy is too high, Anna will burn.

At the same time, The Anachronist is literary fiction. With as many words as a novel, it’s indebted to authors like Joyce, Borges, Calvino, and Pamuk. It uses modernist and post-modernist literary techniques–as well as an interactive format–to explore questions of perspective, historical change, and truth.

The Anachronist is a Twine piece by Peter Levine. It’s long, and paced like a novel rather than like a short story or a poem; it very much belongs to the category of readerly IF [Interactive Fiction]. …

As for what it’s about, that is a little more difficult to describe. The protagonist is being burned at the stake in 1598 (perhaps), but in the moment that she stands in the flame, her mind wanders. She imagines her surroundings in Oxford, or possibly a painting of her surroundings; she thinks about alchemy, the art of memory, the intellectual commitments of a former teacher.

Your task is an abstract one, to do things that globally increase knowledge or decrease entropy. Part of the gameplay involves recognizing and selecting anachronistic references; those links aren’t highlighted for you, but if you succeed in finding something, that counts against entropy.

The knowledge aspect is a little trickier. Most of the choices at least in the early stages of the story are choices either to look more closely at some aspect of the world or else to move onward. My impression was that looking more closely would often increase knowledge, but I’m not certain how consistently that was applied. Some choices overtly claim to have changed your knowledge/entropy status, but I’m not sure that there aren’t other, covert alterations.

I have not yet had the time to read the whole thing. One of the themes so far is a meditation on cultural contact, on how people portray and understand those from other cultures. But that is definitely not the only thing going on, and I’d need to finish the piece in order to say much more.

It’s been online for about three weeks. Some other early readers’ responses are here. Or click to enter the world of The Anachronist.