The claim that support for democracy is falling in most countries–and falling quickest among the young–has caused much consternation this week. One datapoint that supports this argument: “In 2011, 24 percent of U.S. millennials (then in their late teens or early twenties) considered democracy to be a ‘bad’ or ‘very bad’ way of running the country.” Erik Voeten and others have argued that this survey is being presented in an alarmist way by focusing on the minority who chose the extreme responses to key questions. Voeten shows that this is how support for democracy looks if you display the mean responses on a scale from 1-10: 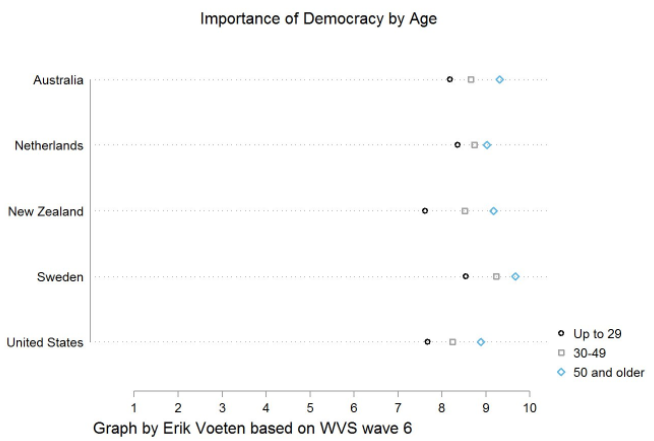 Most people are still in favor, and the gaps by age are not huge.

But it is natural to be a bit uninspired by democracy if you’re encountering it for the first time right now. In my freshman philosophy seminar, democracy has been our topic this week. We’ve been reading:

My questions include the following:

Is democracy a reliable means to achieve such (possibly) valuable ends as human happiness/welfare, liberty and rights, or equality? Is it a process that yields such outcomes? Or is it a good in itself? (To see it as an intrinsic good may require the belief that involvement in self-government is dignified or worthy in some way.) Does democracy mean “voting equality at the decisive stage” (Dahl), or a search for consensus (Wiredu), or an opportunity for discussion that enlarges people’s knowledge and empathy (Dewey et al, not assigned)? Is democracy necessarily adversarial (Eze) or can it be unitary (Wiredu), and if the latter, is unity a good thing, perhaps a sign of fraternité? Finally, is democracy a process or set of rules, or rather a culture and set of norms and practices?

My students are thoughtful, open-minded, and quick to understand various perspectives and arguments. But I think their current views are colored by what they regard as the debacle of the 2016 election–both its outcome and the campaign season that preceded it. I asked them whether they thought the election had changed their views of democracy, and they tended to think it had. They are unlikely to see democracy as an intrinsic good, because it rather seems like an undignified and disappointing spectacle. They are attuned to the dangers of communication (propaganda, group-think, polarization, selective use of evidence) and pessimistic about the potential of communication for learning and consensus-building.

I don’t necessarily disagree. And I certainly don’t play the advocate for any philosophical view in the classroom. But I think that those who hope to engage such young people must make the struggle against forms of politics that they despise seem intrinsically rewarding, and must demonstrate that responsible and responsive communication is possible.