Some say that Trump has captured the support of working-class Whites who are economically stressed or anxious. Others reply that Trump voters are relatively upscale but motivated by racial resentment alone. The former premise suggests that Democrats must do more to empower the working class, including Whites. The latter suggests that White nationalism is our fundamental problem today. Although I see truth in both positions, I’ve argued for addressing the economic and political vulnerability of the White working class. I present that as a strategy for countering Trumpism, but it’s a misguided strategy for that purpose if Trump voters are relatively affluent.

The raw story is that White people with lower incomes are Trump’s strongest backers. 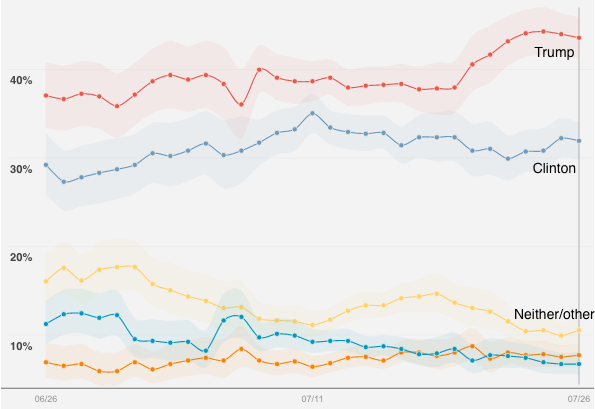 But it’s not just about income and race. Education levels, age, and gender are also strongly related to voters’ preferences in this election, as I illustrate with data from YouGov: 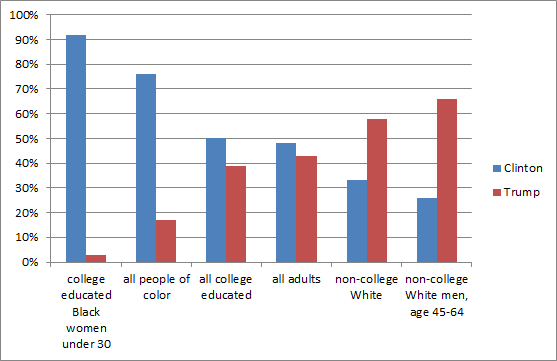 The question is what to make of those middle-aged White men without college degrees, who are preferring Trump over Clinton by more than two-to-one in the YouGov polls (and by 59%-25% in Reuters). Is it economic anxiety, racial identity, or what?

One of the most widely cited pieces of evidence against the economic-anxiety explanation is Jonathan Rothwell’s paper, “Explaining nationalist political views: The case of Donald Trump.” Rothwell, who works for Gallup, conducted a regression analysis of almost 100,000 Gallup survey responses collected over the year that ended in July (i.e., mostly during the primary season). I have no quarrel with the paper, but I would note that it does not debunk a class analysis of the Trump vote.

Rothwell finds that holding a favorable view of Trump correlates with higher, not lower, income. Nate Silver is also widely cited for his finding that Trump voters during the primary season had higher median incomes than Clinton and Sanders voters (but the same as Cruz voters and lower than Kasich voters).

At the same time, Rothwell’s model shows that you are more likely, to a statistically significant degree, to favor Trump if you: (1) hold a blue-collar job; (2) did not attend college; and (3) live in a community with high White mortality rates. Those relationships appear in the whole sample but are especially strong when the model is restricted to non-Hispanic Whites. Further, “more subtle measures at the commuting zone level provide evidence that social well-being, measured by longevity and intergenerational mobility, is significantly lower among in the communities of Trump supporters.”

If social class means income, then class is not a strong predictor of Trump support in Rothwell’s model. At least during the primary season, Trump voters were actually wealthier than the mean American voter. But if class means social status, and status involves occupation and education, then Trump voters tend to be downscale Whites in downscale White areas.

Rothwell’s paper uses a binary outcome of Trump support versus non-Trump support. The non-supporters include Republicans who were still favoring Cruz, Rubio, and others, plus Democrats for Sanders. That makes the analysis a bit dated now that we’re down to Clinton v. Trump. Reuters data suggests that Trump widened his lead among working class White men once he won the nomination. 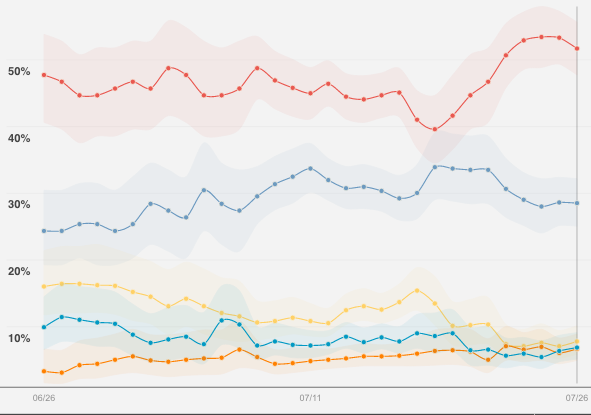 Meanwhile, Clinton is now doing very well among the top 1 percent of the income distribution.

In sum, the relationship between working class status (measured by education) and Trump support seems strikingly strong for the White population. This doesn’t mean that class is the only issue. Race/ethnicity and gender are obviously very significant. But it means that there is some truth to the class analysis.

See also why the white working class must organize and it’s hard to talk about tough issues if no organization represents you.