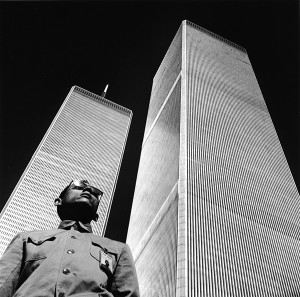 While visiting the excellent Tufts University Art Gallery exhibition, “Tseng Kwong-Chi: Performing for the Camera,” my colleagues and I heard the following story. Tseng was the child of Chinese anticommunist refugees. He moved to the East Village in the 1970s, where he worked and played with people like Keith Haring and Andy Warhol. When his parents visited from their home in Vancouver, they wanted to take him to Windows on the World, the fancy restaurant that used to be at the top of the World Trade Center. It required a jacket, and the only jacket Tseng owned was a Chinese Communist uniform that he had bought in a second-hand store in Montreal. The restaurant not only let him in but fawned over him, assuming that he was a Chinese dignitary. This reception gave Tseng the idea of posing in front of iconic monuments all over the North America and Western Europe, dressed in his Mao jacket, Ray-Bans, and an ID badge that reminds me of the X-Files. He always donned the serious, distant look of the Chairman inspecting the Red Army’s triumphs.

Tseng had studied art in Paris, so Richard Wolin’s book, The Wind from the East: French Intellectuals, the Cultural Revolution, and the Legacy of the 1960s provides some helpful background. Wolin writes that Communist China was all the rage in Paris in 1967. That year,

Mao-collared suits–“les cols de Mao“–had become immensely fashionable. Try as they might, the clothing boutiques in Paris’ tony sixteenth arrondissement could not keep them in stock. … Lui, the French equivalent of Playboy, decided to jump on the pro-Chinese bandwagon by featuring an eight-page spread of scantily clad models in straw hats, red stars, and Red Guard attire. The accompanying captions were culled from The Little Red Book. One striking image portrayed a young woman, unclad and equipped with an automatic rifle, emerging from an enormous white cake. “The revolution is not a dinner party,” read the legend.

Tseng was a Canadian citizen, a gay man, an East Village artist, and an Asian immigrant to North America. In these pictures, he is role-playing the most powerful Asian man of the time, one whose victims–almost all Asians–may number 65 million. By passing as a Communist official instead of an East Village immigrant artist, he was able to experience social recognition in his adopted land. He also parodied the appropriation of serious matters for profitable pop culture and made serious art out of the parody.

See also:  French post-War intellectuals: some generalizations and when is cultural appropriation good or bad?