Kenneth Vogel reported recently in Politico that “[Charles] Koch and his brother David Koch have quietly assembled, piece by piece, a privatized political and policy advocacy operation like no other in American history that today includes hundreds of donors and employs 1,200 full-time, year-round staffers in 107 offices nationwide. That’s about 3½ times as many employees as the Republican National Committee and its congressional campaign arms had on their main payrolls last month.” Vogel adds that the Koch network will spend more than twice what the RNC spent in 2012, that it has more staff and funding in some key states than the state’s Republican party has, and that it is the leading provider of voter data and political training/coaching on the right today, supplanting the GOP.

Vogel and some of his quoted sources emphasize that this network is unprecedented in US history, which seems true. I would add that it appears unique in the world. The Varieties of Democracy (V-Dem) Project offers free data on the political systems of 173 countries. They ask so many questions about each country that the dataset includes 15 million data points. (I am one of many coders for the USA.) The V-Dem project asks about all kinds of ways in which political parties may be strong or weak; autonomous or co-opted; free, regulated or banned–but it doesn’t even pose questions about entities that perform the traditional functions of parties without being parties. That seems to be a novel contribution of the US since 2000.

The Koch network stands for an ideology and policies that I mostly disagree with, but that’s not the only reason to worry about this development–which could be replicated on the left. These are the main reasons:

Below is the Koch network as depicted by my friends at the Center for Responsive Politics. It does not belong in a civics textbook, although a realistic textbook today should probably include it. 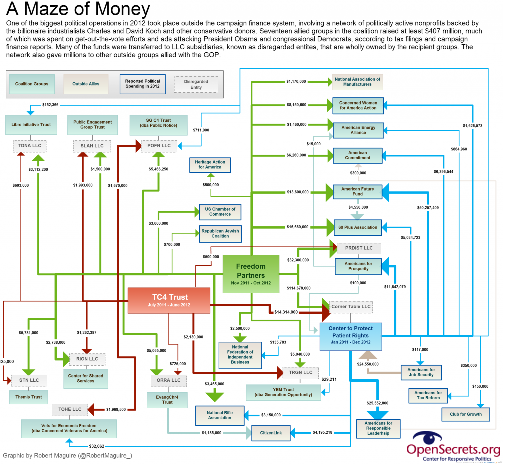