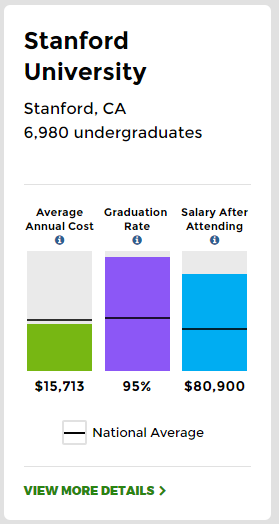 The College Scorecard began as a promise/threat to rate US colleges and universities, but for now, it offers some digestible nuggets of information on more than 3,500 institutions. The results for Stanford are shown to the right, as an example.

I like some things about this. Mainly, it tells a prospective applicant’s family not to be put off by the sticker price. Tuition plus room & board at Stanford costs $64,477, but the average student pays much less than that, graduates quickly, and earns a lot of money. That makes it a good deal (in strictly economic terms) for most people who can get in. In contrast, Cambridge College costs an average of $23,792 and yields an average salary of $36,500 for those who graduate–who represent two percent of those who enroll.

I have three main concerns. First, the average cost overstates the relevant price for a lot of students. Stanford completely waives the parental tuition contribution for families with incomes up to $125,000 a year and waives the whole cost for most families earning below $65,000 (which is about 60% of US households). The average cost is $15k because a lot of Stanford undergrads come from families in the very top tier of the income distribution. If you have a median family income, Stanford will probably be free.

Second, this kind of presentation can mislead about the business model. It can suggest that the real price of a Stanford education is $64k, but thanks to alumni gifts, the university subsidizes attendance for needy students (who, in this case, may be upper-middle-class). I think the following is closer to the truth: there are a lot of highly academically proficient students whose families can easily pay $64k and want to go to Stanford. Their kitchen counters cost more than a year’s tuition. So Stanford charges that much and uses the income to help subsidize all the operations of a research institution. It uses a sliding scale, however, so that all of its students aren’t rich. I don’t necessarily think this is wrong: it depends on how much public good comes from the research. But the numbers give a somewhat misleading impression of the financial model.

Third, the measure of “salary after attending” is very problematic if we see education as a public good. The lowest-paid majors for recent college graduates are “early childhood education ($39,000); human services and community organization ($41,000); studio arts, social work, teacher education, and visual and performing arts ($42,000); theology and religious vocations, and elementary education ($43,000); drama and theater arts and family and community service ($45,000).” A college that produces a lot of preschool teachers, clergypeople, and community organizers is going to score a lot lower on the measure of “salary after attending” than Stanford does. The average salary for recent Hampshire College graduates is $30,800, much less than half as much as Stanford’s figure, but it would be misleading to infer that Stanford offers more value than Hampshire.