Crime, poverty, tyranny, racial injustice, and environmental degradation may be among the chief issues at a given time. But beneath such specific challenges are general forms of problems. To reprise a diagram from a previous post, we face problems of discourse (when we think or want the wrong things) and problems of collective action (when we can’t get what we want). 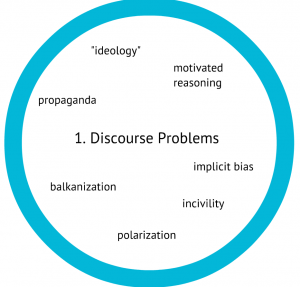 Academics certainly study these problems. Google Scholar finds more than 77,000 books or articles on free-riding, which is one variety of a collective action problem. It finds more than 9,000 citations of implicit bias, which I would categorize as a discourse problem. There is no shortage of material to read, and much of it is useful. 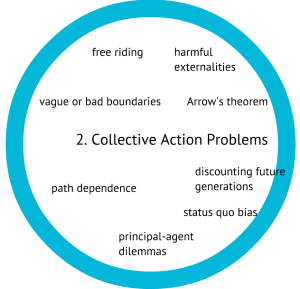 limitations that we should address:

The nascent Civic Studies movement proposes to ask “What should we do?” and then take very seriously the various generic forms of human problems–along with explicit moral argumentation. Three benefits should follow. We should unify our understanding of the various genera of problems–which are now distributed across the social sciences and humanities–by viewing them from a single perspective, that of a reflective small group of citizens. We should enhance human agency and satisfaction by making ourselves the cause of solutions, not just the objects of other people’s actions. Above all, we should actually improve the world by identifying solutions that we (you and I and our friends) can accomplish.

To give a little more concreteness to the list of problems, I will briefly discuss some of the key ones. This is a radically incomplete list; and the discussion of each one below is highly preliminary. The point is to indicate the agenda of Civic Studies.

A subset of these problems will typically confront any concrete group of human beings who aim to improve their world. In many circumstances, the various problems will closely interrelate, causing webs or cycles of challenges. For instance, ideology may prevail over good evidence (a discourse problem) because the effort to become truly informed about public issues is not worthwhile for each party (a collective action problem).

Yet–and this is a crucial point–groups of people do solve human problems. They do build institutions and norms that make life better. Every decent and functioning government, association, neighborhood, and network is a triumph of reasonable hope over chastened experience. The master theorists of Civic Studies are people like Elinor Ostrom and Jürgen Habermas (a student, respectively, of collective-action problems and of discourse problems), who seek to understand in order to defend, improve, and spread such cases of human success.

See also Ostrom plus Habermas is nearly all we need; my piece on Civic Studies in Philosophy & Public Policy Quarterly; the book Civic Studies: Approaches to the Emerging Field; and The Good Society symposium on Civic Studies.