“With Selma and the voting rights bill one era of our struggle came to a close and a new era came into being. Now our struggle is for genuine equality, which means economic equality.” — Martin Luther King, Jr., March 18, 1968 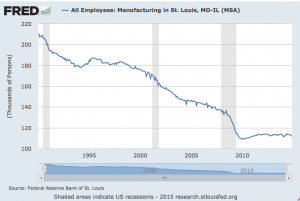 When we consider the events in Ferguson, MO and their aftermath, we need to take account of the trend shown to the left. Almost half of all manufacturing jobs in greater St. Louis, MO have been lost since 1990. Unfortunately, I cannot find a longer trend line, but the deepest job cuts probably came well before 1990. Some cite 1981 as the turning point, the year Corvette moved its plant from St. Louis to Kentucky.

People came to St. Louis for manufacturing jobs. They included African Americans, moving north as part of the Great Migration. Having an industrial job indicated market value. People can turn market value into civic and political power. As an example of that process, during World War II, 8,000 Black workers were hired in St. Louis defense contractors’ factories. Not coincidentally, the First African-American St. Louis Alderman was elected in 1943, and in 1944, the city passed its first integration ordinance.

The reverse is true as well. If you do not have market value, it is very hard to attain or retain political power–or even the ability to stand safely before authority in everyday interactions. Maybe “Injustice anywhere is a threat to justice everywhere”; but injustice can be borne for a long time by people who are viewed as economically dispensable before the rest of an affluent society pays a price for it.

Half the industrial jobs in the St. Louis MSA have disappeared since 1990. Put another way: about 90,000 industrial jobs have been removed in one metropolitan area in one generation. That is an unimaginable blow to the traditional industrial working class. Race definitely enters the picture–in numerous ways. But the graph above is economic; the problem it depicts is deindustrialization; and unless we address its consequences head on, I don’t think we can make real progress.