Each of these objectives has been pursued for a long time. John Dewey, for example, was a great proponent of news media literacy. To get a rough sense of what has been taught over time, consider this graph of the percentage of American students who’ve had various courses on their transcripts: 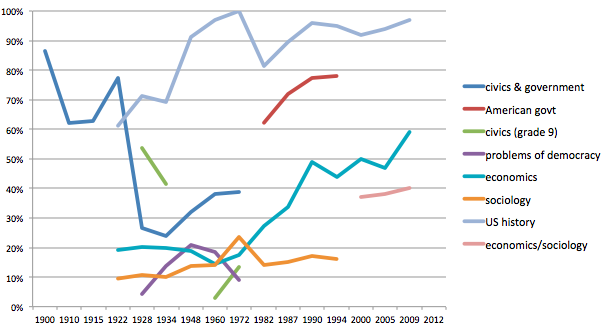 This is a complex picture, without simple trends. I would, however, emphasize a few observations:

1) A course that truly focused on using the news media was “problems of democracy,” which typically involved having to read the daily newspaper in order to prepare for pop quizzes on current events and classroom discussions. That course had its heyday in the 1940s and is now largely gone.

2) Courses that look like college-level social science are much more common today than they were in the past.

3) American Government is a hardy perennial course. But it has to cover a wide range of material, including the history and structure of the US government. Following current events is often an afterthought, not aligned with standardized tests.