I can certainly understand why citizens of Detroit would object to the aestheticization of poverty and abandonment–to their city’s being used to produce marketable images of tragic grandeur. But the story of Detroit is tragic, in the Aristotelian sense. Recall the plot: the city rises from a few thousand residents to 1.8 million when hubristic men like Henry Ford invent forms of mass production that transform work itself. Black people migrate there from the South, face violent hostility, but manage to obtain political and cultural power. The city builds cars, weapons, and pop music that conquer the world. It becomes a model of modernity, vividly depicted by Diego Rivera on the walls of its world-class museum. And then Detroit collapses to 700,000 people who live amid the empty shells of its industrial past, while the nation looks away.

There is nothing new about treating a tragic fall as sublime. “Round the decay / Of that colossal wreck, boundless and bare / The lone and level sands stretch far away.” Or: “It was at Rome, on the 15th of October, 1764, as I sat musing amidst the ruins of the Capitol, while the barefoot friars were singing vespers in the Temple of Jupiter, that the idea of writing the decline and fall of the city first started to my mind.”

In fact, because the Detroit Institute of Arts is an encyclopedic collection, one can find on its walls many images of ruin. For example, Jacob Isaaksz van Ruisdael paints the Jewish cemetery of 17th-century Amsterdam falling to pieces in a wild storm, as a momento mori. I don’t know why he picks Jewish graves, but perhaps because their dead are dead for good (in his view), not subject to resurrection.

The American Frederic Church imagines the coast of Syria as a kind of museum or theme park of ruins: Roman, Gothic, and Islamic piled almost on top of each other.

Anselm Kiefer paints a vast three dimensional canvass, parts of it literally burnt by the artist. He means to represent a particular brick factory in India (one that manufactures its own walls and sells the same walls, brick-by-brick, to consumers) and also the ovens of Auschwitz–which was another kind of Jewish cemetery. 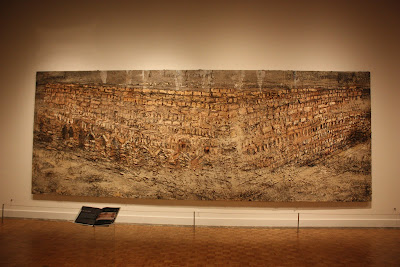 The DIA even includes a whole Gothic side chapel moved to Detroit from a chateau in Lorraine–reconstructed there from a real Old World ruin. When you stand inside it, with its streaked and burnished stone and stained glass all around you, you are in a late-medieval building, inside a much larger structure patterned on the ruins of ancient Rome, near the center of a modern American city that is partly falling into ruin.

The DIA itself is hardly ruinous. On a Friday night, it is packed with visitors of all ages and backgrounds who stroll through its magnificent galleries, listen to live jazz, or play chess. But the collection, whose market value might reach $1 billion, will likely be sold to make a small dent in the bankrupt city’s pension obligations. In the best case, the purchasers will be a consortium of foundations whose wealth derived from Detroit and which have pledged to give the art back once they buy it. It’s a strange twist that some of the objects they may buy and return to the city from which their endowments came will be “ruin porn” of other times and places.