The new book by Amy Chua and Jed Rubenfeld (The Triple Package: How Three Unlikely Traits Explain the Rise and Fall of Cultural Groups in America) is stirring controversy, as it was meant to do. The authors are nothing if not successful marketers.

I don’t agree with critics like Sekuta Mehta who argue that exploring the relationship between cultural traits and prosperity is racist. If a culture is a cluster of norms, preferences, habits, and values, than each culture will be more or less consistent with the culture of capitalism. Consistency with capitalism will confer advantage, and we should understand that.

Chua and Rubenfeld should not be condemned just for arguing that culture matters. But I think they fail in two other ways, and these weaknesses bother me less for ideological reasons than because I don’t like to see senior academics ignoring complexity and rigor in order to publish best-sellers that would not pass even the most ideologically open-minded peer-review process. In other words, I am not offended by the conclusion but by the methods.

First, their empirical argument is deeply problematic. They identify eight prosperous US ethnic groups and, after rejecting other explanations for their economic success, insist that the essential reasons must be three cultural traits (a sense of superiority, a sense of insecurity, and impulse control). This is the kind of method that persuaded physicians, for many centuries, to use leeches to bleed patients. Look at my eight most successful medical cases–people who recovered from mysterious illnesses. What do they have in common? I bled them all. Ergo, leeches work. You don’t have to be a fool to think this way, but the scientific method works much better.

When studying the impact of culture on prosperity, the scientific gold standard (an experiment) may not be possible. But one must at least avoid selection bias to choose large and representative samples, measure each case using independent data, and rigorously consider multiple explanations. In this case, you would look at all US ethnic groups (poor as well as rich) and treat their median income or wealth as a function of many plausible explanations that can be reliably measured. Cultural factors might or might not emerge as significant predictors in a multivariate model. You won’t find out from Chua and Rubenfeld.

The second problem is their very thin moral (or normative) framework. Assume that having a sense of cultural superiority conveys competitive advantage in a market economy–what of that? The authors do raise the point that striving for material success may not be the best way of life, but that is an aside. Surely, each of the grand ideas in their book–a sense of superiority, insecurity, delayed gratification, and wealth itself–is problematic.

More rigorous research than theirs brings into focus other ways in which fitting well with capitalism can be morally troubling. For instance, Annette Lareau finds that middle-class siblings are quarrelsome because they are raised to see each experience as an investment in their own success. If Brother has to wait during Sister’s violin lesson, that is a waste for him, and he acts out. Working-class children are much better at cooperating and more cheerful about it, because they are expected to make their own entertainment together. Sister is a potential playmate for Brother.

This is just one small example of the ways in which fitting well with capitalism can deform the soul. Capitalism may also uplift, liberate, and improve. The moral impact of capitalism is a complex and challenging topic, on which Chua and Rubenfeld have little to offer.

That said, we ought to have this conversation and not treat it as inherently offensive. Mehta, for example, decries as racist the claim that culture affects prosperity and ends with his uncle Vipinmama, “who lived every day of his life in the pursuit of happiness” and was wise enough not to fit with capitalism. But that just underlines the importance of capitalism as a culture with which a person may fit–or not. If you live like Vipinmama, you may be happy, but you will not long be rich. We ought to recognize that fact before we decide what to do about it.

Eight years ago, I proposed that we might think of three axes of debate: whether cultural norms affect success; whether material success is a worthy goal; and whether state action can enhance welfare. All combinations of answers to those three questions are tenable. I think I am with people like Pierre Bourdieu and Annette Lareau who emphasize the economic impact of culture while doubting that it is morally good to be materially successful under capitalism. They want to use the state to change the relationship between culture and wealth, thus falling at the front top of this cube (which I explain more fully here): 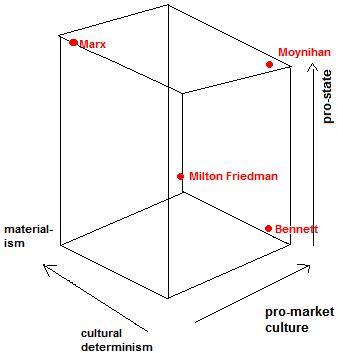